It should be obvious that looking after our belongings is key to rejecting a throw-away culture and reducing waste because it prevents breakages and prolongs the life of items.

I’ve now entered the maintenance and cleaning phase of my “home revival” which follows a decluttering and rehoming phase, then an upcycling and repairing phase, as well as a disposal phase where a few items have been recycled and composted, and a small amount sent to landfill. So, I think there’ll be some posts in the coming weeks about how to maintain and clean items to enhance them and extend their life, but today I got started by getting all the blunt blades in my home sharpened.

It’s important to have sharp knives, scissors, clippers and other tools in your home because dull blades often cause accidents. This is because they don’t grab properly, making them more likely to hurt you by slipping. Tools that work well are also more efficient meaning you get jobs done quicker and to a higher quality, which creates a more pleasant experience when undertaking tasks. And of course, if it works, you’re less likely to throw it away which saves you money.

Knife and scissor sharpening is a skill I want to learn and pass on to my kids, so I watched some YouTube videos and gave it a go using a sharpening stone and sharpening steel. I completely botched it, making the blades worse so I stopped before I did any more damage.

I decided to get a professional sharpener to do the job. 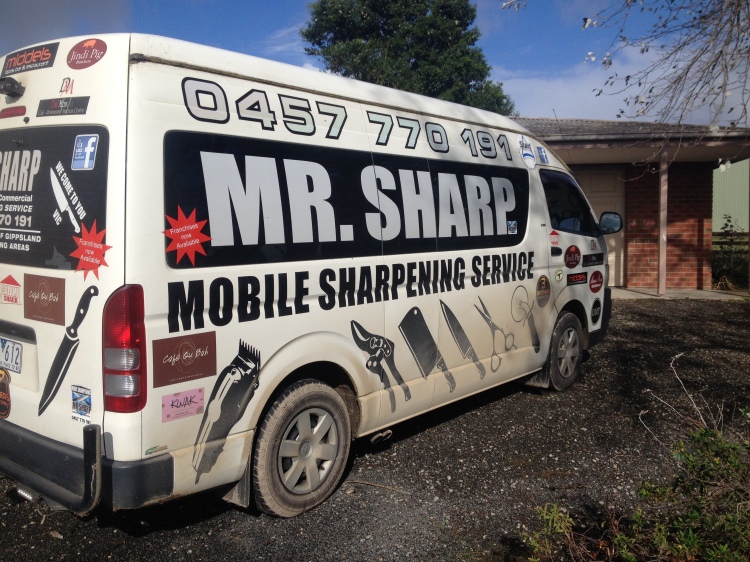 Knife sharpening is the first thing I’ve spent money on for my entire home revival and I’m totally fine about that because I’ve saved so much money by doing everything else myself. It’s also cheaper than replacing all my knives, scissors and clippers, and they shouldn’t need sharpening again for 12 months.

I had a good chat to Scott from Mr. Sharp (it’s a mobile service which can sharpen all sorts of blades) and he explained that it does make a difference when you buy the more expensive knives and scissors because the steel holds its shape and sharpness for longer and they are easier to re-sharpen. He says a quality, well cared-for knife or tool is something you should invest in once and enjoy for a lifetime – even pass on to the next generation of chefs in your family. I like that idea and I’m kind of sad that I don’t have high quality durable knives and scissors, but I’m still proud that I’m making my cheaper tools last as long as possible.

Now that my tools are all nice and sharp, I need to prevent the blades from being damaged. This means storing them properly. This is where I begin to feel a bit of a fool. I had a knife block but I got rid of it a few years ago, because I thought it was a decorative item that simply took up space. I had no idea a knife block was used to stop the blades from being banged around in a cutlery draw! Scott said to try storing the knives on magnets on a wall if I wanted to save space, so I’ll look into that when we’re setting up the new house. He also said I should stop washing them in the dishwasher. Whoops.

What People Are Saying

“I am inspired by your blog and Instagram, so please keep blogging forever!”   Kim

“Your blog is fabulous and I love what you’re doing, you’ve given me so many ideas and empowered me to deal with my own stuff properly (and to minimise it to begin with). You’re doing a fab job and I’m really a mad keen fan!!!”   Cathy

“I’d just like to say thank you for all that you share. You give clear, practical and achievable alternatives to the vast amounts of plastic in our lives. I love your work!”   Kellie

Can’t find what you’re looking for?